The Interior Design / Interior Architecture Educators Association was established in 1996 to advance education and excellence in interior design. Its members are universities in Australia and New Zealand that offer degrees in interior design, interior architecture, and spatial design.
Latest news
✕ 2022-11-21

After a brief hiatus, the IDEA Inception awards are back for 2022. These awards celebrate the best of the best work by graduating students across our member institutions, with an overall winner plus up to two commendations. Awards will be announced on the IDEA website in February 2023.

From today IDEA has a brand new website, with a focus on showcasing excellent student work and research projects from our member institutions across Australia and Aotearoa New Zealand. Many thanks to the wonderful team at u-p.co for their amazing work on this project!

Edited by Julieanna Preston and Luke Tipene, this issue includes contributions that consider the unlikely, improbable or downright impossible in spatial design. In recent history, fictions, fantasies and fabulations have offered productive opposition to the rampant instrumentality of pragmatism and functional planning. Their impact has instilled optimism, sparked alternative visions, and been sites of countless critiques of conformity and the status quo.

We are delighted to announce our ongoing partnership with Architecture Media and ARTICHOKE® magazine which recognises excellence in the visual and written presentation of an interior design proposition by final year students across the IDEA member institutions. Look out for the winners who will be announced in the next issue of the magazine.

This call for papers seeks theoretical, historical, and experimental analyses on the concept of uncertainty in interior environments. Uncertainty is often considered an undesirable quality, a transgression from normative behaviours and functions. Yet, uncertainty is inherent to critical and creative practices of spatial design. It underpins the complex experience inhabitants make with interior space beyond the designer's intention. History is replete with spectacular examples of designs, drawings and spatial practices that embrace the unknown to surpass the predictive, authoritative and determined limitations of their space-planning and programming. The full call for papers is available through the idea journal website here.

While the world reels, reconfigures, and recovers from the drama and trauma of 2020, wishing to thwart the effects of grief and comprehend what was once incomprehensible, there is all good reason to turn our imagination to ‘what ifs’, dreams, and other speculations as an antidote to hopelessness. This issue calls for contributions that consider the unlikely, improbable or downright impossible in spatial design. In recent history, fictions, fantasies and fabulations have offered productive opposition to the rampant instrumentality of pragmatism and functional planning. Their impact has instilled optimism, sparked alternative visions, and been sites of countless critiques of conformity and the status quo.

Loosely defined impulses towards the unrealisable and the most illogical of things approached in the most logical of ways have led to unparalleled episodes of creativity in drawings, poems and material production. From Piranesi, Peter Greenaway, Kurt Schwitters, Dora Maar, Hans Op de Beeck, Ursula Le Guinn, John Hejduk, to Danielb Libeskind, explorations of the impossible have led to new interpretative frontiers that move the limits of interiority and spatial practices. Lest we not forget or become complacent with the contributory and often unrecognised impact of contemporary social media, advertisement, and technological surveillance that continues to shape interior worlds, experiences, and values. In many ways, there is as much focus on unpacking, making sense of and disproving the dangerous impacts of fictions, fantasies and fabulations as there is on setting the scene for dreams and magical realities. 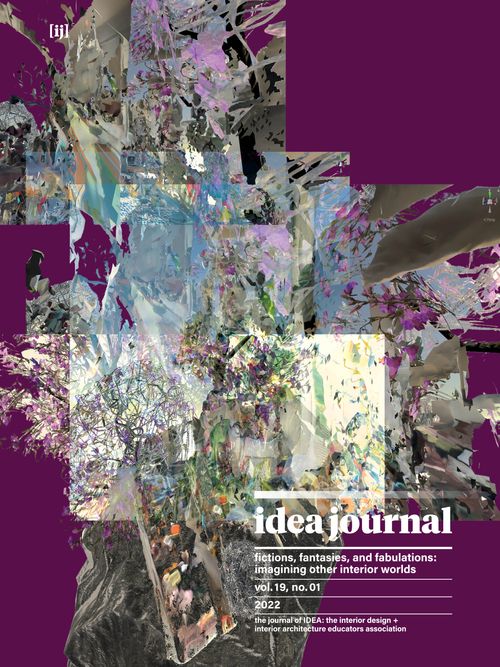 A Design Studio on Fantastic Space

Exploring the Narrative of Spirited Away

Tempering Grief through the Victorian Home’s Furniture and Objects

Notes on Difference, Disability, and Space in the Shape of Water

the Living Interior of the Austrian Pavilion at Expo Milan 2015

The Winchester House as Cinematic Trans-mediation

How Not to Forget

The Speculative Interior as Apparatus of Memory

a Reparative Reading of the Interior Genre-painting

An Aotearoa-specific method of spatial communication 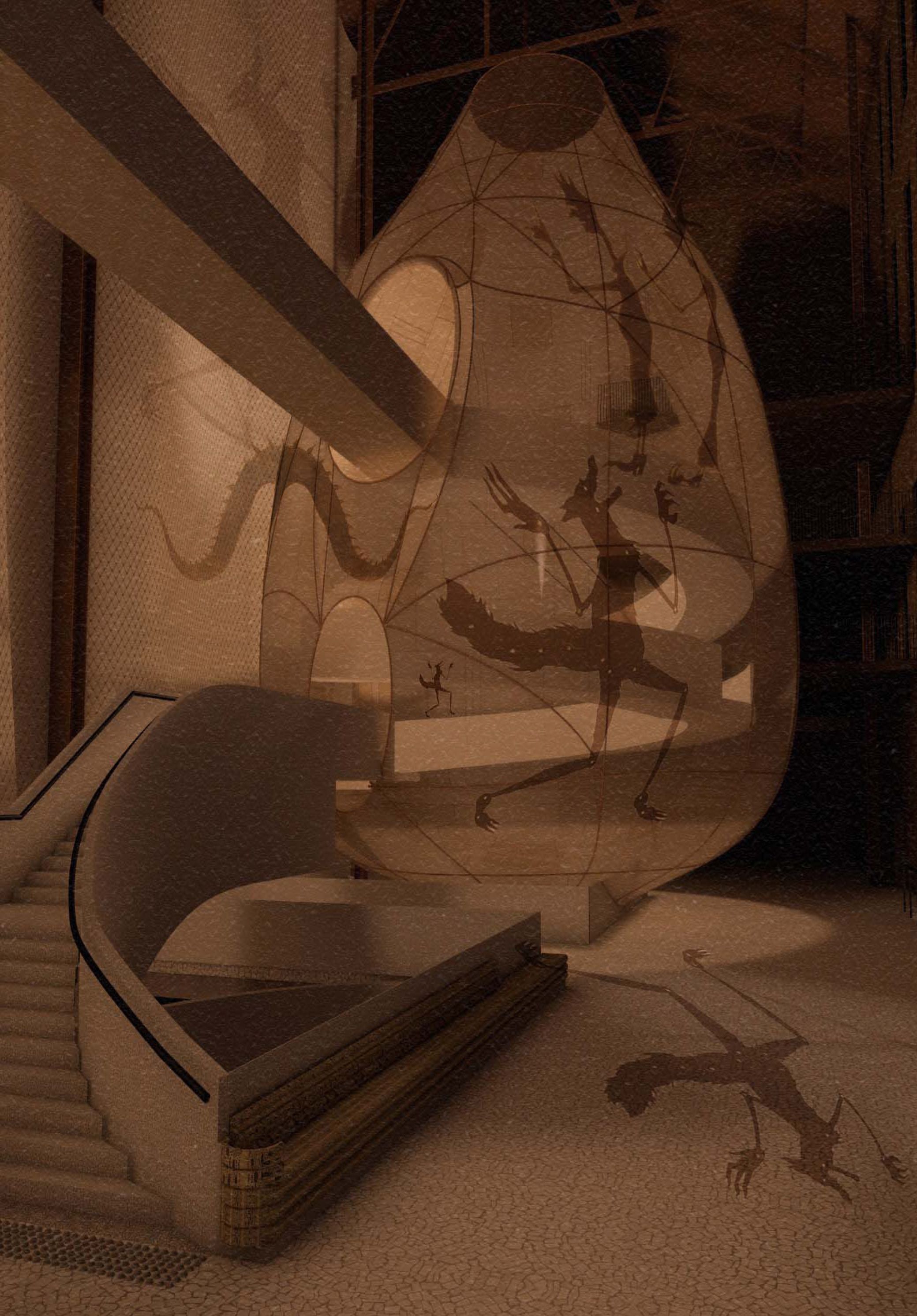 Georgia Martel, The Museum of Lost Arts
A tale told through architecture about finding, or rather re-finding. Re-finding ancient arts and crafts that have been lost, that have been under-appreciated, made obsolete by industrial methods, or simply kept behind closed doors. This is a tale about how an abandoned relic, a lost vessel of a former time, became a destination for a new tale, a confluence of past and future, a destination for the passing on of haptic knowledge and the re-telling of old stories. Shameera Hingmire, Unfold
Unfold explores the transformation of a cultural icon to a playground encouraging collective journeys and experiences through the narrative of performance itself. The project is to be experienced through this lens, creating a curated journey that is enhanced with each return. Seunghwan Byun, a_au_ctr
An architectural and interior providing an accessible and culturally significant platform which allows the creative expression of emerging artists. Wenqi Yu, Reincarnation
Overlapping and consistent circulation emphasises the sense and idea of reincarnation for the occupant. Experiential drama is emphasised through the interior and the use of time perception in interior transitions. Lachlan Kirkland, Against the Binary Lachlan Kirkland, Against the Binary
I want what is special to be about this project, and this design, is how it is done, and not what it is. I have an intention to keep the program of the space very limited, and simple. What I want to push myself as a designer, and as a person, is to consider how this is all happening. How this space is tactically instigating agency or creating a sense of something. How it really is impacting.

The final year Interior Architecture Graduation Project challenges students to engage in the social, political and cultural complexities of our cities to develop considered, informed and holistic regeneration design proposals. Through a research-led design practice, we aim to push the boundaries of adaptive-reuse and contribute to the conversation on how to make better spaces for people and the environment. We are always looking for innovative solutions with a unique vision to re-use and reinterpret the existing.